Dianara is a pump.io client, a desktop application for GNU/linux (and other systems) that allows users to manage their Pump.io social networking accounts without the need to use a web browser, and provides many features not available in the standard web interface. It is free software. (Learn more about Pump.io here.) 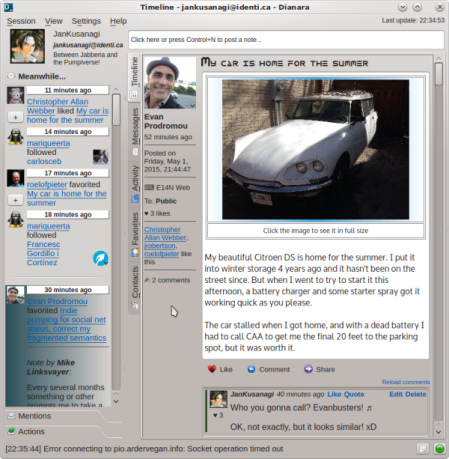 As of current version, 1.4.4, you can authorize the program to access your data, browse your timelines (including jumping to any page with Control+G or clicking on the page number), post text with some formatting (to Public, Followers, person lists and specific people), upload pictures, audio, video and other files, interact with the posts (like, comment, share, edit and delete) and the comments (like, edit and delete).

You can also edit your profile, change your avatar, change your e-mail, watch the minor activity feeds (meanwhile, mentions and actions) with snippets, open posts from there, follow people from their avatars, manage your contact lists, including ‘person lists’, browse their posts (if they’re in the same server as you) and follow new people. You can set up a network proxy if needed. 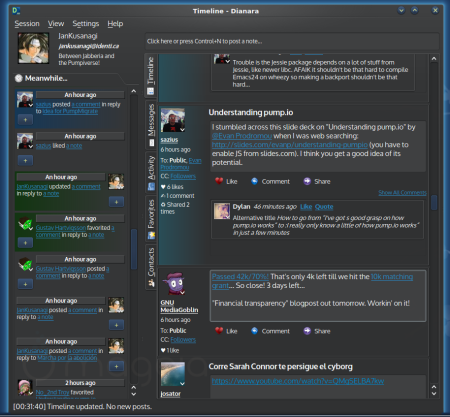 Check the Dianara category on this blog for more up to date information.

2 new messages! These are system-type notifications under Plasma Desktop, by the way

There are also a lot of configuration options (such as fonts and colors), a tray icon, and FreeDesktop.org notifications.

Dianara is available in Chakra, Mageia 4 and later, Debian 8 (Jessie) and later, Ubuntu 13.10 (Saucy) and later, KaosX, openSuse 13.2 and later, Parabola and Fedora 26 and later repositories.

The latest development code is in GitLab.com, at https://gitlab.com/dianara/dianara-dev. Latest stable version can be found at linux-apps.com or at Dianara’s release archive at dianara.nongnu.org.

On the technical side, it is, as usual with my projects, based on Qt, and using QOAuth. Check the INSTALL file carefully for details. See also the BUGS and TODO files for a list of known issues and missing features.

If you find a bug, or wish to request a feature, go to the issue tracker.

If you’re interested in translating Dianara into your language, please let me know. It mainly involves using Qt Linguist, and it’s quite easy! The source code includes a TRANSLATING file, with instructions.

Since July 2013, Dianara can be used as a client for identi.ca, which is now part of the global federated Pump network.

Dianara was going to be a Diaspora client in the beginning, hence the name.

Feedback is welcome, and if you have any questions, go ahead and ask in the comments or contact me on Pump.io.