A new version of Dianara, my desktop client for the Pump social network, has just been released. This will be the last of the 1.3.x series, and the last one to support Qt 4. 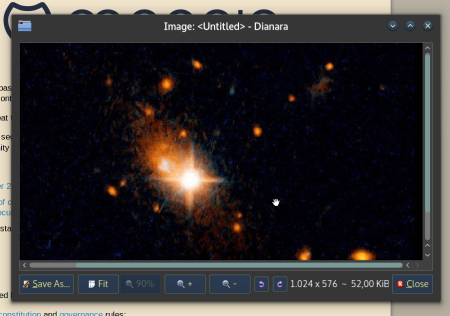 It’s another small release. The biggest change is the updated image viewer, which now supports zooming with the mouse/touchpad, and dragging the image around, as full-blown image viewers usually support 😉

If you want to build it with Qt 5.x, note that your system will need a Qt 5 build of the QOAuth library, which not all GNU/linux distributions provide yet. Mageia 6 does, and so do Archlinux, openSUSE (in a separate repository) and Debian (in Experimental). If you have that, but experience problems building it this way, your QOAuth might be missing a feature file (.prf), like used to be the case in Debian.

Dianara is available in the repositories of several GNU/linux distributions. At the time of this post, at least Debian 8 (Jessie) and newer, Mageia 4 and later, Chakra, Ubuntu 13.10 and newer, KaosX, openSuse 13.2 and later, Parabola and Salix OS. Hopefully they’ll have this release packaged soon, either in regular updates or in backports repositories. Thanks to all the great packagers who make this possible! 😉

You can find Fedora packages at Rye’s COPR repo, and at HowCanUHaveMyUsername’s repo (outdated). Maybe you could request Fedora to include it officially.

As for other platforms, LuisGF, a fellow pumper, provided builds of Dianara for MSwindows in the past. He could use a hand creating updated packages!

Another fellow pumper, Alex Jordan is working on builds for OSX.

If you need, or want, to build from source, check the INSTALL file for details on how to build it and the necessary build-time and runtime dependencies.