A week ago I blogged about a new project, Revised, which will eventually be a simple visual editor for a visual novel game engine called Ren’Py.

The project is going well, so I’ve released a 0.1 version as a preview.

Download the source code from Qt-Apps.org: http://qt-apps.org/content/show.php/Revised?content=152369 (sorry, I can’t provide binary packages for any distributions at this time, check the INSTALL file for compiling instructions).

There are still a million things missing, but there are already several things you can do with it:

After some basic stuff has been added to the game, you can save it and run it in Ren’Py, straight from Revised’s menus. 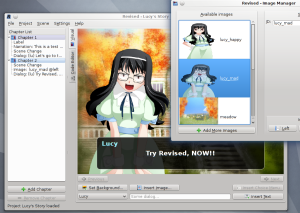 This is Lucy, from Ren’Py, and she’s mad!

I hope you like it, and if you ever thought about creating novel-type games with Ren’Py, but found that writing scripts was confusing or tiring, maybe this program can help you. The goal is that you’ll need no programming experience to make your simple game.

You can check out the main Revised page on this blog for more information, and the Revised category to see all the posts about it.

Revised, a visual editor for Ren’Py

Time for a new project! This time it will be a simple visual editor, or GUI, for Ren’Py, the visual novel game engine.

Game creation with Ren’Py is based on writing scripts with special Ren’Py syntax, and the possibilities are almost endless. But writing scripts is difficult for some people, so clicking menus and buttons in a graphical editor feels a lot easier. That’s the idea behind Revised: to offer a simple assistant to create simple games, or the skeleton of the game.
Revised generates .rpy files that Ren’Py will use, and those files can still be enhanced with a regular text editor, of course.

For now, there is basic project generation, image manager and character manager. There are no releases yet, but you can get the current code from Gitorious, here:
http://gitorious.org/revised

As usual, it’s based on Qt and targeted mainly at GNU/linux systems.

As always, you can get it from Qt-apps, here:

If you have the development version, you already have these fixes applied. 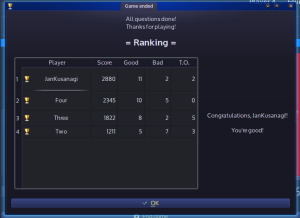 I also want to use this post to send a big “thank you!” to everyone who translated, packaged or beta-tested Auralquiz. Thank you, you rock!!

You can get it from Qt-apps, here:

Changes since v0.6 include:

– Translation files are included in the binary as resources and loaded correctly.
– Metadata analysis is faster, performed using TagLib, which is a new dependency.
– Sound control now relies on Phonon States, works better with all backends.
– Hardcore difficulty level now uses the “Type-the-answer” mode.
– “Reload music” button, to use when there are new files or some have been moved/deleted.
– Several visual changes.

See it in action in this screencast:

Just a quick update to link to a video showing the game in action.

And a list of the main changes in what will be version 0.7:

– Translation files are included in the binary as resources and loaded correctly.
– Metadata analysis is performed using TagLib, which is a new dependency.
– Sound control now relies on Phonon States, works better with all backends.
– Hardcore difficulty level now uses the “Type-the-answer” mode.

A bug was discovered in 0.5 which caused a crash during analysis of the music files in the user’s folders, if there were many files without valid metadata (no artist and/or title fields).
This has been fixed, among other things, and also a few small improvements. 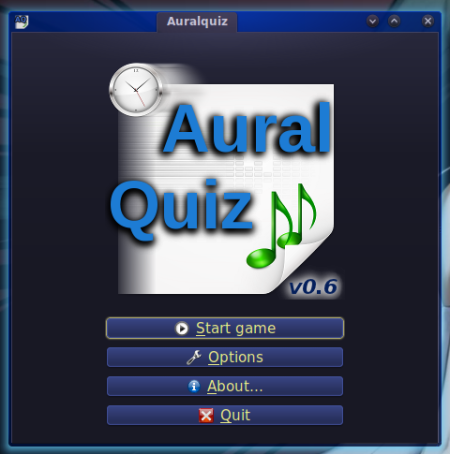 After selecting “Start game”, the main game options appear: difficulty level, amount of questions, amount of players, and their names. 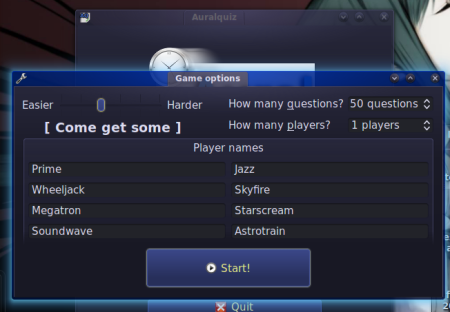 As always get it here:
http://qt-apps.org/content/show.php/Auralquiz?content=139127

And as always, feedback is welcome!

*UPDATE: Packages for Mandriva available here, thanks to Symbianflo.

Or from Gitorious, but the source in Gitorious might change at anytime, so for v0.5, it’s better to get it from Qt-apps.org

Also, if you’re a Slackware user, somebody from Slacky.eu prepared a package:
http://www.slacky.eu/asche/pkgs/index.php?ver=15&pkgname=auralquiz&pkgver=0.5

Speaking of provided packages, an Archlinux user created a PKGBUILD in AUR for Stressitout, here:

This time a game: Auralquiz

Time for a new project. This time it’s a simple game, a music quiz.

This is the temporary initial screen. The current logo is basically a ripoff of one of the mime-type Oxygen icons, by Nuno Pinheiro and the Oxygen team.
Actually, I haven’t asked yet if this is OK, but I guess it will be 🙂

The idea behind the game is not new, but what I’ve seen available for GNU/Linux is either old, GTK-based, or just an Amarok script.

The game plays short pieces of music files from the player’s folders, and presents a question and several answers about the current song. The fastest the answer, the more points the player receives.

Auralquiz will be a full application, and hopefully, with several game modes, multiplayer mode, etc. It is based on Qt and Phonon.

As with my other projects, you can get the source at Gitorious: http://gitorious.org/auralquiz