Due to the upcoming shutdown of the gitorious.org service, caused by the company behind it being acquired by GitLab, I’ve moved my Git repositories to their proposed gitlab.com service.

You can update your clone with this command in their corresponding directories:

… and then just git pull as usual.

Each project has an issue tracker right there now.

Let me know if you find any issues with this move.

Hello there! Since the blog looks a little dead, here’s a quick post!

I haven’t done much coding lately, so not much to blog about. The development versions of some of my programs have had some minor updates, but not enough for a release. I’ve also adapted some of them to be Qt5-compatible.

On a side note, sometimes I get visits from people looking for information on why Auralquiz doesn’t work for them. Well, all I can say for now is: use the Phonon-VLC backend. Phonon-Xine worked great with it, but was (and for the moment, still is) deprecated, and Phonon-Gstreamer has some problems with it, so… Phonon-VLC is the one that works for now. Sorry for the trouble.

StressItOut v0.1 has been released.
You can download it from Qt-apps. 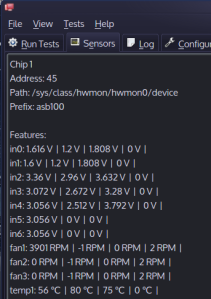 This overdue release fixes compilation with Qt version 4.8 and later, adds Ukrainian and Russian translations by Drool, an ALT Linux contributor, and has some basic lm_lensors support, along with other minor enhancements.

StressItOut packages are available on Archlinux’s AUR service, and on Alt Linux repositories.

You can get the latest development source from Git, here:

Thanks to all the packagers, translators, testers and bug reporters out there! \o/

Well, only basic initialization of libsensors right now, but I wanted to check if this gets posted automatically to identi.ca 😉

Next version will be 0.1, since StressItOut is becoming more mature and complete 🙂

You can get the latest source from Git, here.

On a related note, it’s nice to find people talking about StressItOut, like here http://zenway.ru/page/stressitout or here http://nnm.ru/blogs/auna/xhdbench/

So… StressItOut is not forgotten

Last time I introduced a new program, DukeTrayem, as a fun side-project, but StressItOut, the burn/test application has seen several improvements since the previous blog post, which haven’t been explained.

– There is a new “view” menu which allow setting full screen mode.
– Translations to spanish and catalan languages are provided.
– The CPU load test is now real, with a configurable number of threads.
– The Optical drives test is basically complete.
– The memory test needs to be converted to using threads too, and more patterns, etc, but it has evolved, too.
– Better logging.
– Duration of the test can finally be set in hours and minutes.
– More minor fixes everywhere, and probably other things I’m forgetting 🙂

I also recorded a video. It’s uploaded, for now, to Youtube. I’ll upload it to blip.tv soon too.

And the mandatory updated screenshot:

If you try it, remember: feedback is very welcome! 🙂

Happy 2011!!
StressItOut has evolved quite a lot since the last blog entry. It has new tests, although they are almost dummies at the moment, the main menu works, there’s a new “log” tab which will hold detailed information during the test run, and some fixes here and there.

This is the new “log” tab, shown along with the menu option to save the log to a file:

And this is the not-so-new “configuration” tab, with a new (temporary) addition to enable the user to type the device names of the serial ports to be used by the serial port test. Tests that haven’t been created yet have been disabled. 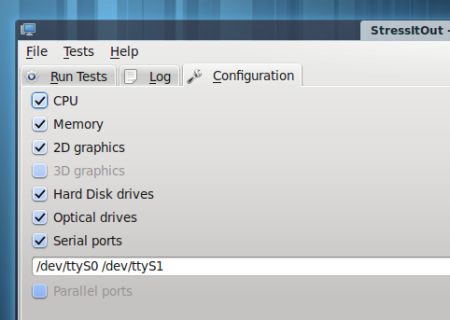 SIO is also on Qt-apps now.

A few days ago, I set up a place on Gitorious for StressItOut, and yesterday I made the first commits.

You can get it here: http://www.gitorious.org/stressitout

But beware, it’s in a very early stage of development, from someone quite new to Qt development!

Also, since last time I blogged, StressItOut got a new, quite decent 2D OpenGL painting test, and is now able to save its own configuration.

The project now has its own page on this blog: https://jancoding.wordpress.com/stressitout/

A few days ago I blogged about a new project of mine: StressItOut.

It now has 4 kinds of tests available, at a very basic stage: CPU load, Memory test, 2D graphics test, and Serial port test. Too bad I don’t have around here any of the serial port loopbacks I used at my old job. I’ll have to build one one of these days. 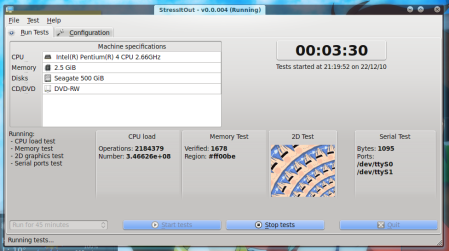 Some time ago, I built a customized Debian-based LiveCD with a KDE Plasma desktop, for work.
We repaired and tested industrial computers, so I thought it could be very useful. And it was!
I added all kinds of apps that I found useful for our hardware tests. The only problem was, some of my workmates wanted a proprietary app called BurnInTest included, since they were using its MSwindows version already.
There was a GNU/Linux version, so we ended up adding it to the LiveCD, but I thought it would be very nice to be able to have a similar, graphical tool to do all the tests that app did, but that was Free Software.

So now that I’m getting into Qt/KDE development, it’s time to build that app!
Here’s what I have so far: 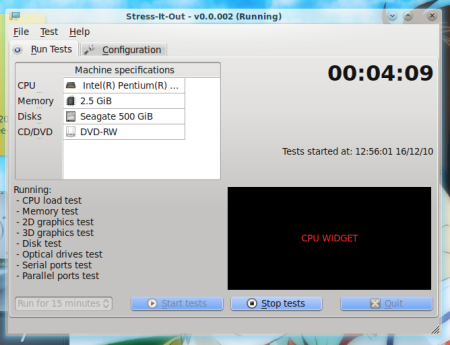 Hopefully I’ll show it to the world via Qt-apps.org or similar places when it’s ready to do something real 🙂